Are we going to see Batman’s BatWing in the upcoming Batman film The Dark Knight Rises?  Check these images out and make up your own mind.

Set Photos from the Dark Knight Rises of a strange aircraft like vehicle have surfaced online that could indeed be the Christopher Nolan’s envision of Batman’s BatWing.  If this is indeed the BatWing then it is worlds apart from any previous incarnations of the craft in the previous Batman movies (which is a damn good thing).  In Christopher Nolan’s Bat world we have seen vehicles like the Batmobile and the Batbike recreated in an altogether more realistic and a whole lot more practical fashion, for example the Tumbler, with this in mind taking a look at the following images I can definitely see similarities in the style and wouldn’t be surprised if this turned out to be a very practical version of the BatWing. 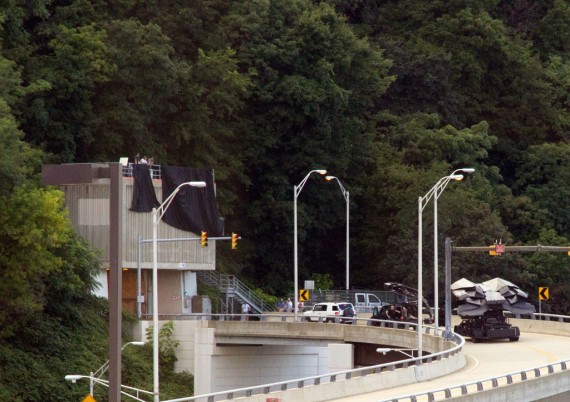 These shots come as just one of many on set photos of Christopher Nolan’s The Dark Knight Rises leaked to the media from opportunist passers by, so far we’ve seen Bane’s full costume, a camouflaged Tumbler used by mercenaries, Marion Cotillard as what seems to be Talia Al Ghul and even Catwoman on the Batbike.  There has been much disappointment aired over some of these images most prominently the final look of Bane, but do consider that any images taken from onset are not how Nolan would have wanted us to see these things and which could still be the subject of added special effects and lighting techniques.