Warning: Creating default object from empty value in /homepages/42/d300759857/htdocs/BadRobotNinja/wp-content/plugins/redux-framework/ReduxCore/inc/class.redux_filesystem.php on line 29
 Percy Jackson Lining up to be the Next Harry Potter? | Bad Robot Ninja

The last movie in the Harry Potter series comes out in July, and many fans are excited to see the last part of the story on the big screen.  As the release date approaches, most fans find it hard to see beyond it into the summer beyond. No doubt many fans will see it several times, host viewing parties so they can do the whole series in a row, etc.  But since Harry Potter and the Deathly Hallows – Part 2 is the last installment of the Potter series, fans are going to need to find a new multi-part book-to-series franchise to embrace. Who will they look to now that J.K. Rawlins has thrown in the towel?

Why not Percy Jackson?

Like Harry Potter, Percy Jackson is a series of young adult literature by Rick Riordan. The series has five books featuring Percy Jackson, a normal kid that discovers he is the son of Poseidon, the God of the Sea. But he doesn’t know this at first. Percy stumbles upon his abilities, discovers that there are people around him who have known his truth for a long time, and eventually leaves everyday life to join other demi-gods at Camp Half-Blood.  The books take young readers along with Percy Jackson on various adventures with mythological creatures, battles, and other trials that test his character. Does any of this sound familiar? 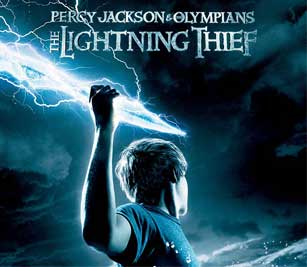 The first Percy Jackson movie in 2010, Percy Jackson and the Olympians: The Lightning Thief made around $89 million at the U.S. box offices and $137 million around the globe, which was more than enough for movie executives at Fox 2000 Pictures to set up a sequel.

In Riordan’s second book, Sea of Monsters, Percy and his friends set off to find the mythical Golden Fleece and free a friend that has been captured in order to save a tree that guards the border of Camp Half-Blood. The sequel is expected to be called Sea of Monsters too, but will more than likely draw on other plot lines from the four remaining books. Logan Lerman, who plays Percy Jackson, is already 19, and since the character in the books is 12-17, rumors have it that making a separate movie for each book won’t be possible.

Lerman isn’t the only one returning to the series. Chris Columbus, who directed and coproduced the first movie in the series, will be back too. Columbus directed the first two Harry Potter movies (Philosopher’s Stone and Chamber of Secrets) and even though he is stepping into the producer’s role for the sequel, he is sure to bring some elements of Potter cinema to Percy Jackson.  The Sea Monster will be directed by Thor Freudenthal recently known for directing Diary of a Wimpy Kid, and written by Scott Alexander and Larry Karaszewski who are familiar with the young adult audience, having worked on Agent Cody Banks together.

Camp Half-Blood isn’t exactly Hogwarts, but there are enough similarities to quell the Potter shaped hole that will be left after Deathly Hallows Part 2. There will certainly be an eager fan base that is hungry for movies about boys and their fantastical adventures, and the growing base of fans of the Percy Jackson books will certainly be excited to see the novel come to life on the screen. Fox 2000 Pictures is expecting a release date of 2012, with filming to take place this summer.

About the Author: When he’s not out skiing the Utah powder, Greg Buckskin is a writer and blogger for Comcast.USDirect.com – home to XF Cable.