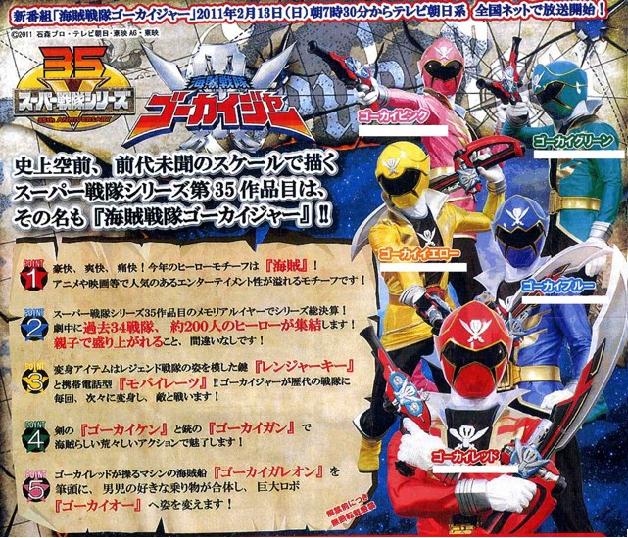 Super Sentai or The Power Rangers as it is better known in the west, has a new upcoming series starting in Japan and this time round the theme is Pirates, yes you heard me, Power Ranger Pirates (Super Sentai Pirates), freaking awesome!

Super Sentai is the long running Japanese teen action hero show that was adapted into the popular show The Power Rangers for American and Western audiences, using much of the same stories and alot of the same Power Ranger footage.

To Celebrate the 35th anniversary of Super Sentai, the above initial images for the newest Super Sentai series have surfaced, allow me to introduce the Goukaigers, sporting the same colours as the original Goranger series but with a pirate twist. The rangers will be equipped with a Goukaiken (pirate style sword), a GoukaiGun (pirate style gun) and use giant pirate ship zords.

If rumours are true our heroes will have the power to travel between different Super Sentai universes making for some interesting cameos from previous characters and draw on the power and likenesses of previous rangers by using Rangerkeys.

The Super Sentai pirates (Goukaigers) air date is set for February 13th 2011, we will keep you posted on new developments.