The first image of Henry Cavill as Superman in Zack Snyder’s reboot, Superman Man of Steel  has been officially released by Legendary Pictures and Warner Brothers.

There is always going to be mixed feelings over superhero costumes when they go through the process from comic book to film as bright blue skin-tight spandex isn’t always a good look in reality, but judging by this first image of the Man of Steel Henry Cavill is looking pretty darn cool as Superman.  The blue spandex has been dulled down into an obsidian almost carbon fibre texture while still keeping the superman look and feel.  While the image itself looks like its been heavily stylised with an air of 300 style (Snyder’s earlier film). 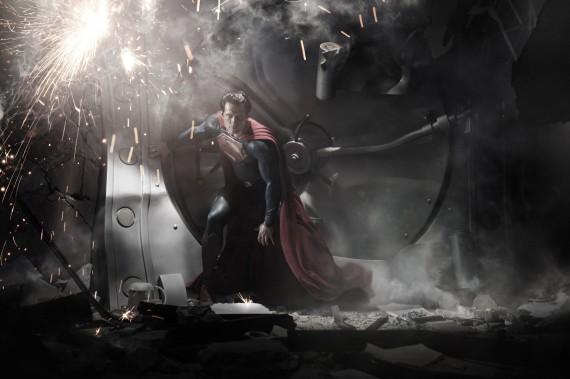 The only details of the story that we have so far are that Superman Man of Steel will focus on the rise of Superman from his early days as Clark Kent and will feature the kryptonian villains General Zod and Faora.  Alongside Henry Cavill as Superman the big cast will feature Laurence Fishburne as Perry White, Diane Lane and Kevin Costner as Martha and Jonathan Kent, Michael Shannon as General Zod, Antje Traue as his evil partner Faora and Russell Crowe as Superman’s father Jor-El.

Superman Man of Steel is due out in June 2013 and we will bring you more updates as they are released.