The first image of Tom Hardy as Bane in Batman the Dark Knight Rises has appeared online.

As the hype for Christopher Nolan’s next Batman movie The Dark Knight Rises increases fans have been treated to the first image of the films most publicised villain, Bane, who is being portrayed by Tom Hardy. 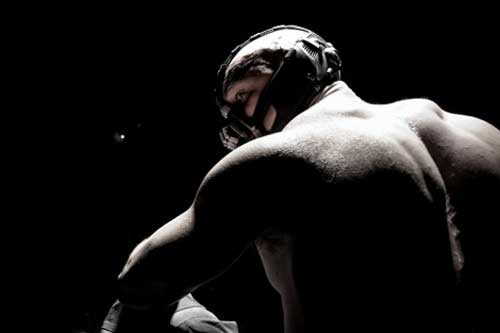 The image does not disappoint, sticking with Nolan’s realistic portrayal of the Batman comic book series while staying true to the awesome stature of the beast from Batman comics.  Nolan’s has approached the series by staying on the side of reality placing the world of Batman in a world that is altogether more believable than some earlier portrayals and Bane looks set to stay within this remit.

Bane is an arch nemesis of Batman, a genius of a man with an almost superhuman strength brought on by injections of a muscle enhancing serum known as venom.  Bane is responsible for wearing Batman down to almost breaking point by pitting him against some of his greatest enemies in one night and then breaking his back with the coup de grace.

Batman the Dark Knight Rises starring Christian Bale, Ann Hathaway and Tom Hardy is due out in July 2012 look out for more information and images of the cast as they appear.